Back to all posts

A scholarship success story takes a defining moment, an experience, sometimes even studying abroad, to inspire students like Gabby DeMott to write a winning scholarship essay. She earned herself a whopping $10,000 through The Bill Browning Scholarship for Ann Arbor Public Schools and some nice press coverage.

The scholarship application required an essay answering the following prompt: “Discuss an accomplishment, event, or realization that sparked a period of personal growth and a new understanding of yourself or others.” Writing this essay gave Gabby the opportunity to reflect on and write about her experience in Germany and what she took back with her when returning to America.

Since she won big, we asked Gabby to share tips for future scholarship applicants, and she told us her scholarship success story!

Why did you decide to apply for this scholarship?

I think one of my teachers shared this scholarship with me, and I applied because it was pretty easy to do so.

What was the essay writing process like for you?

I actually wrote part of my essay in Germany as a way to just reflect on the experience, but I later included it in the whole application essay as I wrote throughout the school year.

What are you going to do with the scholarship award money?

Any tips for future students applying for scholarships?

Apply to local scholarships because they’re a little less competitive, but they come from really generous people who care about the community.

Why would you recommend Going Merry?

Going Merry made it really easy to apply for the scholarship and streamlined the steps to receiving the money after I won.

Discuss an accomplishment, event, or realization that sparked a period of personal growth and a new understanding of yourself or others.

There were only a few minutes to go and our eyes were glued to screen. On the edge of our seats, clutching whoever happened to be next to us, we watched as the referee blew his whistle and the German players took their free kick. The ball was hit with precision and skill; it flew up over the Swedish players, past their goalie, and was caught safely in the back of the opposing team’s net. We all jumped up and screamed, a mixture of German and English, of excitement and relief, of pride and anticipation.

We stood, enraptured, for the last several minutes of the game as Germany kept its 2-1 lead over Sweden. The horde of us, Germans and Americans alike, hugged and cheered and made our way out onto the balcony, where we chanted “Deutschland! Deutschland! Deutschland!” for the whole village, the whole country, the whole world to hear. Never have I felt so accepted while being an outsider, so proud of a country that isn’t even mine, so part of something I didn’t really belong to.

My German friends didn’t care that we were from different countries; they didn’t care that we would only be staying for three weeks. They accepted us into their homes and their daily lives, their traditions and their celebrations. In watching that World Cup game, it didn’t matter that we were from different places; we were all cheering for the same team. The acceptance I felt in Germany extended beyond that living room. I came to the country on a three week exchange with ten other students from my school.

We each stayed with host families and attended the Wildermuth Gymnasium, which was surprisingly accommodating to a gaggle of loud American teenagers. The teachers were friendly and welcoming, the students treated us like ordinary peers, and even the people I interacted with in public were understanding.

Before coming to Germany I feared judgment based on my level of the language (which is nowhere near as good as the German students’ English) and American politics. It was intimidating to be in a country with limited knowledge of the language and the customs, even though everyone was welcoming. People did ask myself and the other students about the US’s political climate, but no one blamed us for it. They recognized that we were outsiders, that the place we came from had flaws, and they accepted us anyway.

Since that trip, I’ve found myself trying to provide that acceptance to people in my own country. For example, I work at a canoe livery and we receive a lot of visitors with limited English. Some of my coworkers will avoid such customers because they don’t want to take the time to explain things, to exercise patience with someone who may not understand them. If people had done this to me in Germany, my time there would have been much less enjoyable; in fact, I would have been offended.

So now when someone walks up to me at the livery and asks a question in English that isn’t perfect, I smile and welcome them. I take my time to make sure they understand, that they can have a good time, and that they feel accepted. It’s a small action, but I know firsthand that it can make a big impact, at my place of work and in the world.

We have a few resources to walk you through writing your winning essay for your scholarship application, just like Gabby. Check out these blog posts: 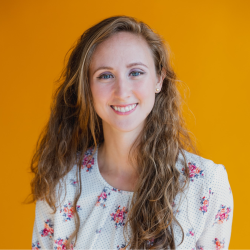 Kelly Lamano
Though always a creative, Kelly's momentum into the world of writing and publishing arrived when she attended college. She quickly learned the financial value - and cost - of honing her craft, and sought scholarships that would be crucial to not only funding, but fueling her education. She wants to help new students thrive with Going Merry's easy scholarship finder. Kelly holds a bachelor's degree in Broadcast, Print and Online Media, and a minor in Spanish from Florida Southern College.

Ready to find scholarships that are a match for you?

Get an estimate of how many scholarships you’re eligible for, instead. Just answer 7 quick questions.
No sign-up required.